the wardrobe staple of contemporary dress

the works of an anonymous Italian artist, referred to by art historians as

‘The Master of the Blue Jeans’

of a dark blue coarse material reminiscent of modern denim.

By the Master of the Blue Jeans;

So, did denim material originate in Italy as wear for the working/poorer people?

Or, as some hypothesise in Nimes, France

from which the word denim probably stems?

Or, with continued research might evidence be discovered to reveal that

and to various regions of the U.S.A

the midwest:  where jeans were the costume de rigueur

of the American cowboy. 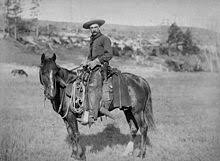 Parts of California:  where jeans were the apparel for miners

Rural Mississippi:  where jeans were worn by sharecroppers

Then along came Hollywood costumiers who robed the stars in denim

Bad boy on and off-screen

From where ever stems its origins

has certainly weathered the fashion storm

and jeans the ubiquitous trouser made from its cut

has emerged a wardrobe basic of cow-hands to glam stars.